The following extremely detailed research into the life of AFS Fireman Robert John Deans has been carried out by researcher Fiona Smith.

Auxiliary Fireman Robert John Deans was born on 8 January 1913 in West Ham, London, the ninth of the eleven children of Thomas Bell Deans (1868-1927) and Emily Louisa Deans née Stevenson (1870-1952). At the time of his birth, the family home was at 62 Eversleigh Road, East Ham, London.

The birth of Robert John Deans’ father, Thomas Bell Deans, was registered in West Derby, Liverpool in 2Q 1869. Thomas Bell Deans was baptised on 9 May 1869 in Walton on the Hills, Liverpool, Lancashire, the son of Scots-born parents James Deans and his wife Christina of Boundary St, Liverpool. Thomas’s family must have left Liverpool in between 1879-81 after the birth of his brother Donald in Birkenhead in June 1879, as by the time of the 1881 census the family were living in Poplar, London. The marriage of Robert’s parents, Thomas Bell Deans and Emily Louisa Stevenson took place in West Ham, Essex in 1894.

By the time that the 1901 census was taken, Thomas B Deans was a boiler maker aged 32, living at 62 Eversleigh Road, East Ham, Essex with his wife Emily L Deans aged 30, and their children Evelyn C Deans aged 4, James H Deans aged 3, and Ivy Deans aged 1. Emily had been born in Canning Town, and Evelyn in Plaistow, while James and Ivy were born in East Ham. All these areas are right in the heart of London’s ‘East End’. 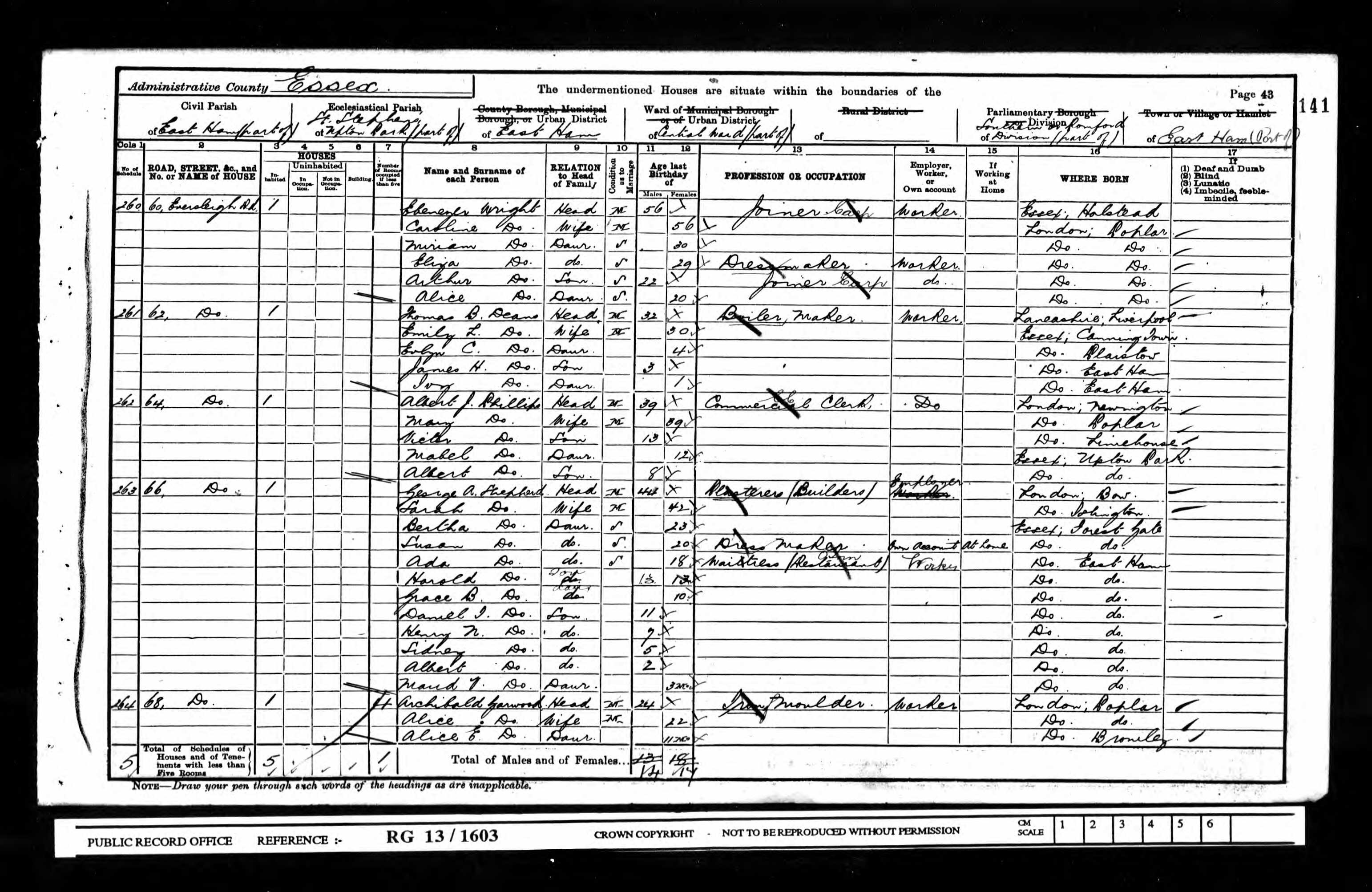 We found a record for an Emily Louisa Deans, who was admitted to Essex Asylum on 22 May 1906, and discharged on 15 August 1907. (Source UK Lunacy Patients Admission Registers 1846-1912 via Ancestry). It’s worth noting that ‘ours’ is the only Emily Louisa Deans that we have been able to find in Essex between 1901 and 1911. The Essex County Lunatic Asylum, in Warley, Brentwood, was later renamed Brentwood Mental Hospital in about 1920. We did wonder if Emily’s stay in the asylum might have been precipitated by the death of a child, but found no evidence of this. Nor did we find any newspaper reports relating to Emily or her husband Thomas, which might have explained a stay in an asylum. 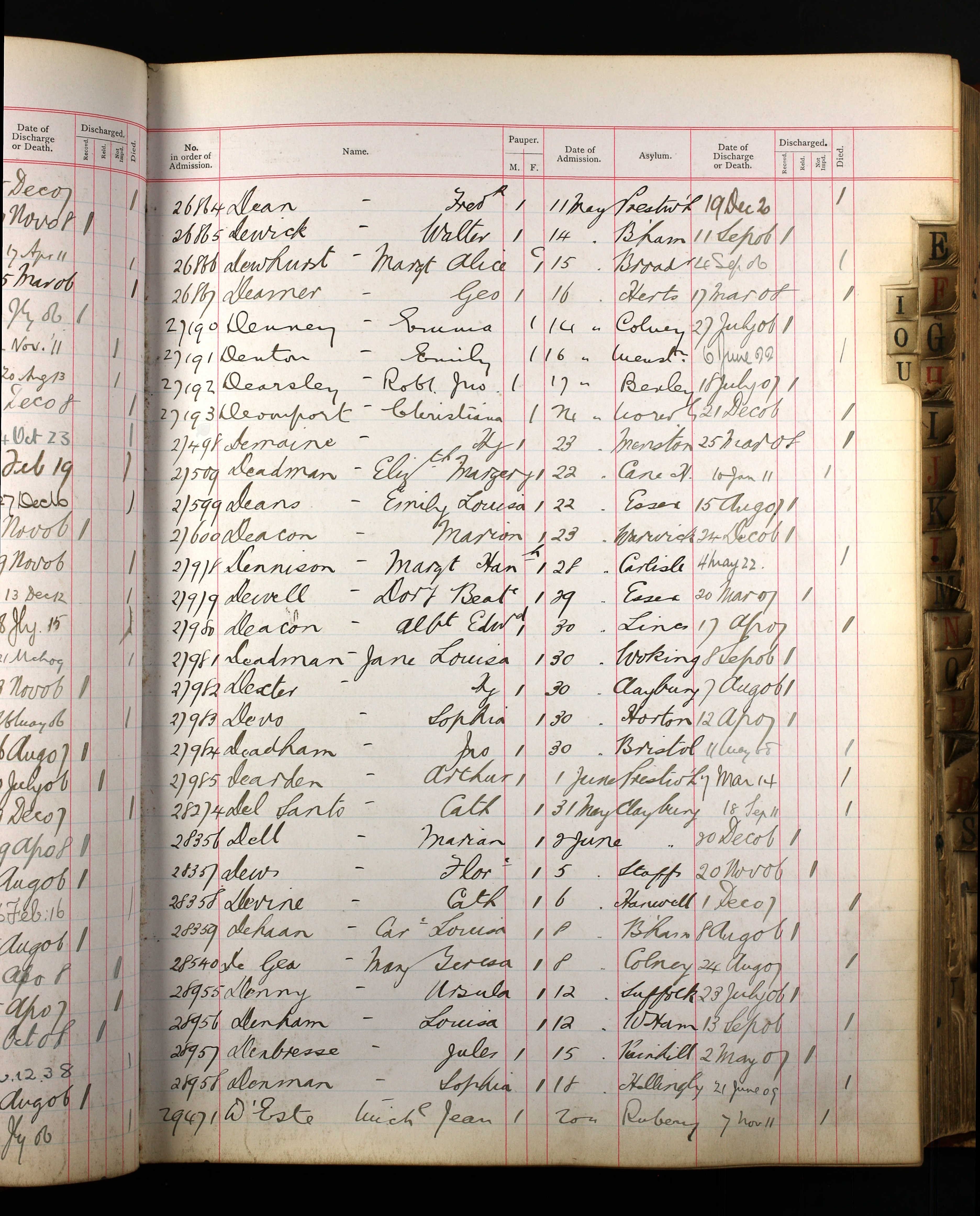 In 1911 Thomas Bell Deans was aged 42 and a boiler maker doing repair work on ships, living at 62 Eversleigh Road, East Ham with his wife Emily Louisa Deans aged 40, and their 8 children, Evelyn Christina Deans aged 14, James Herbert Deans aged 13, Ivy Deans aged 11, Annie Deans aged 9, Jessie Catherine Deans aged 8, Clara Louise Deans aged 6, Nellie Elizabeth Deans aged 2 and Gladys Barbara Deans who was not yet a year old. All the children, except for Nellie and Gladys, attended school. The census records that Thomas and Emily had been married for 15 years and had 8 children, all of whom survived. The family’s home had 5 rooms, which given the size of the family still living at home, would have meant extremely cramped living conditions. 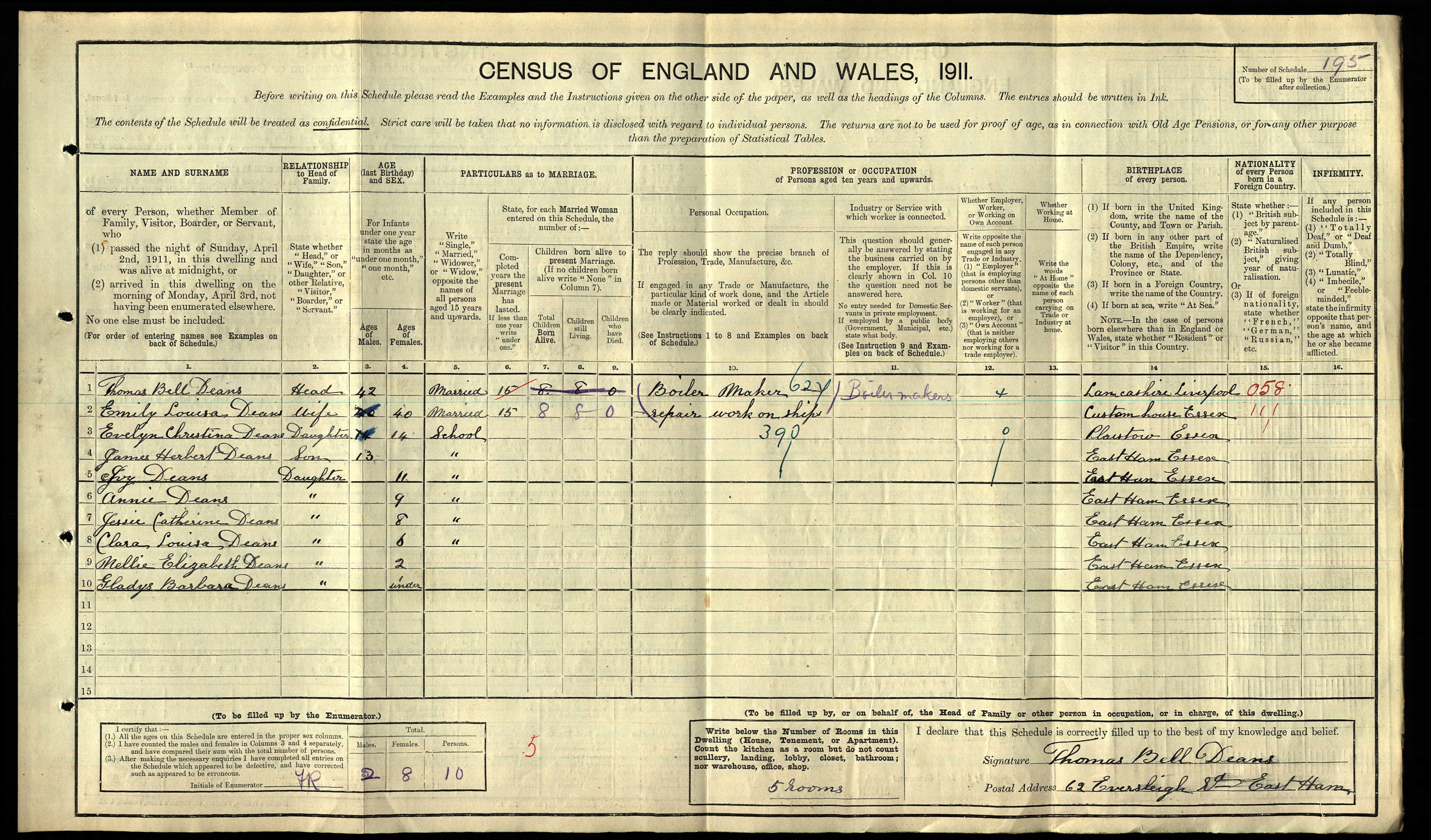 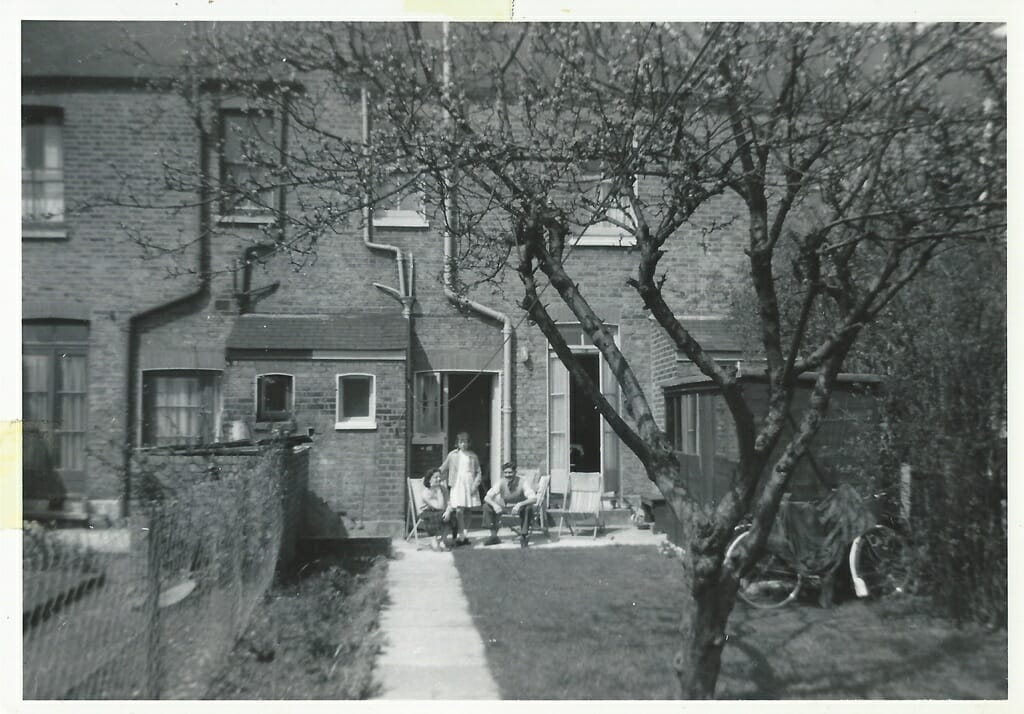 Note: The name of the company Robert’s father was employed by is misspelled in the 1921 census.  R & H Green & Silley Weir were ship repairers.

When Robert John Deans was 14 years old, his father Thomas sadly died, the death of Thomas Bell Deans aged 58 was registered in Romford in 3Q 1927.

With the threat of another World War imminent, the British Government acted swiftly by organising a head count of the whole civilian population, which culminated in the 1939 Register. The Register was the pre-requisite for the issuing of National Identity Cards and the information recorded the full names, addresses, dates of birth, occupations of individuals and additional information such as somebody serving in the armed forces, or an ARP Warden, or somebody serving in the Auxiliary Fire Services (AFS). Robert John Deans actually appears twice on the 1939 Register! The first entry shows Robert J Deans (born 8 January 1913) as an unmarried solicitor’s clerk, and member of AFS Beckenham, at the District Fire Station, Glebe Way, Beckenham with his AFS colleagues. The second entry shows Robert John Deans (born 8 January 1913) as an unmarried solicitor’s clerk, and member of AFS Beckenham, living at 144 The Grove, West Wickham, Beckenham, with his brother Donald Leslie Deans (born 5 March 1914), an unmarried aircraft electrician. The brothers shared 144 The Grove with the Fossey family. They were Harold Fossey (born 24 September 1897) a married costing clerk (vehicles)/investigating clerk civil service, Ivy Fossey (born 26 September 1899) who was married and doing unpaid domestic duties, and unmarried schoolgirl Jean Ivy Fossey (born 24 November 1926). Note: Jean was Harold and Ivy’s daughter, and their only child. The birth of Jean I Fossey (mother’s maiden name Deans) was registered in Romford in 4Q 1926. 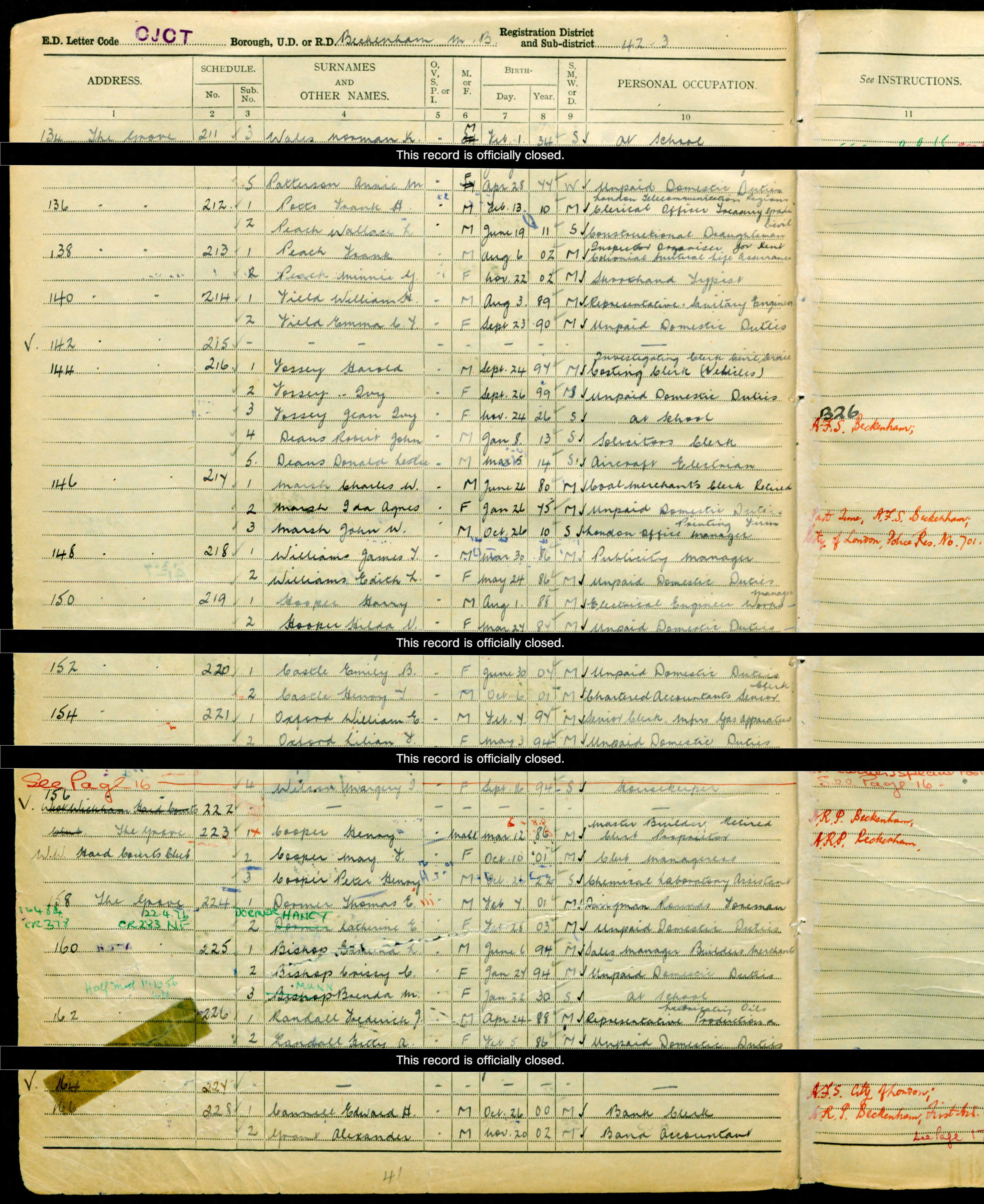 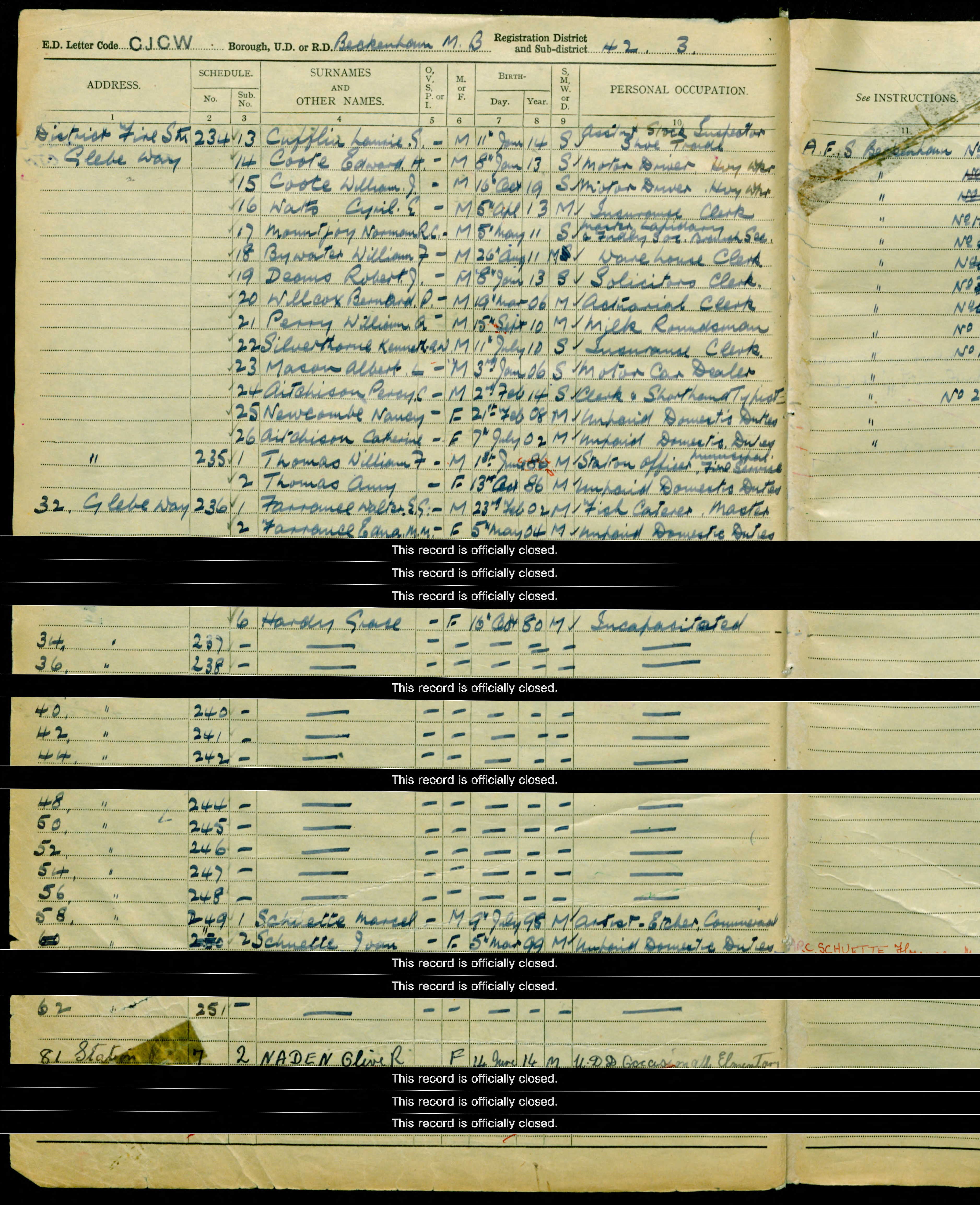 The British Government also took the decision to make all men over the age of eighteen undertake basic military training. Certain roles were deemed essential and were therefore not part of the army reserve call up, so conscious of ‘doing his bit’ Robert signed up with the newly formed Auxiliary Fire Service instead (AFS). Prior to the start of WW2 the Government recognised the fact that the threat of War was imminent and that they were poorly prepared for a second World War. The Government acted swiftly with the Fire Brigade Act of July 1938 which demanded the recruitment of an auxiliary fire service as part of the country’s Civil Defence Force. As the nation’s capital, London was a natural prime target. Dockland warehouses packed with highly combustible oils, grain and timber were clearly a risk and the narrow maze of streets would provide an easy path for the fire. It was obvious that a large number of firefighters would be needed to prevent London becoming little more than a smoking ruin. 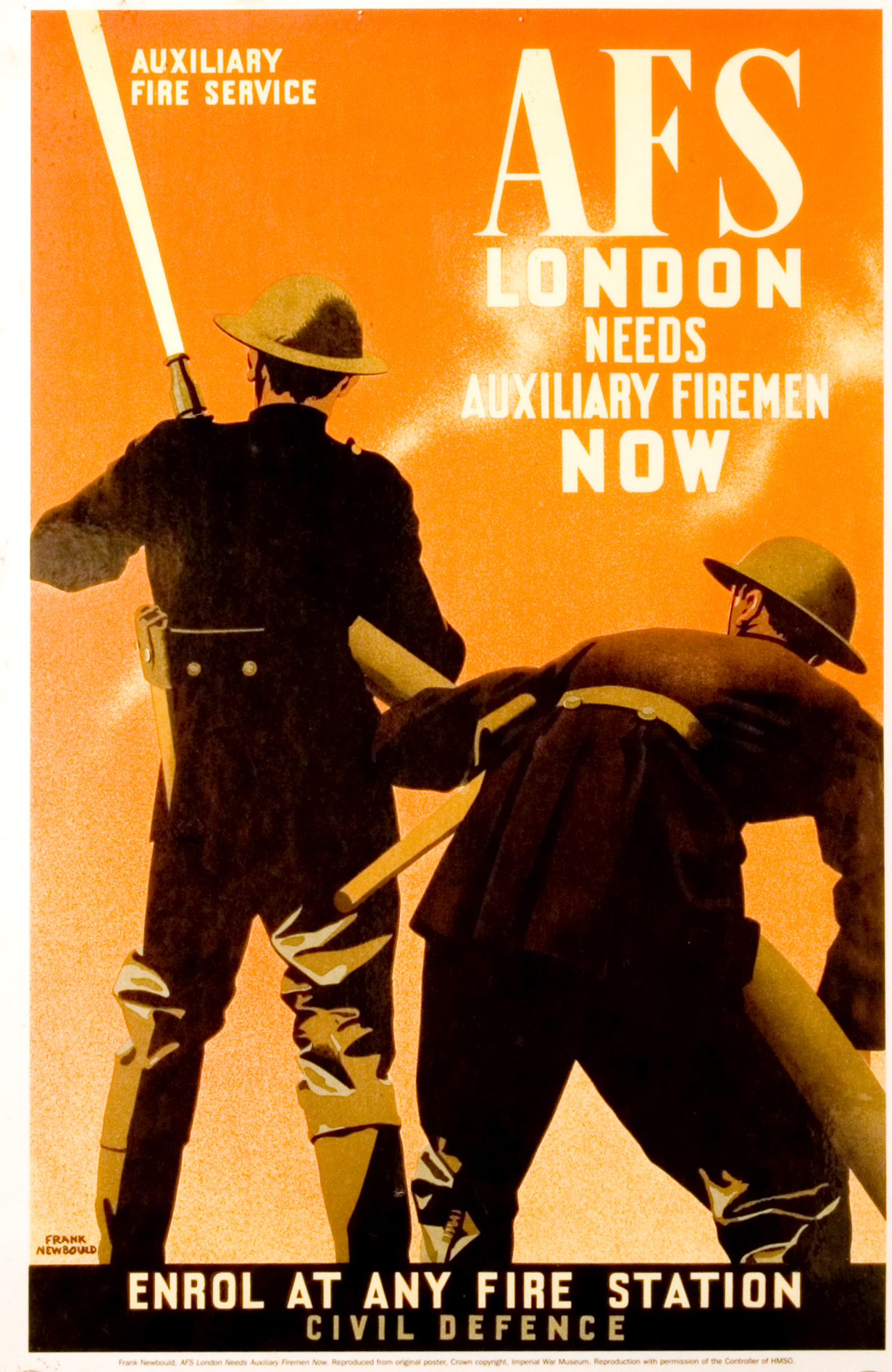 The answer was to expand the regular Fire Brigade by forming an Auxiliary Fire Service. By 1939 about 28, 000 men and women had joined the AFS and regular firefighters, who had been trained as instructors, put the new recruits through 60 hours intensive training. Originally recruits were unpaid volunteers, but eventually the men were paid £3 per week, women received £2 per week, with youths under 18 and messengers earning £1 per week. At first recruits endured poor accommodation, inadequate conditions and were dubbed “£3-a-week war dodgers” by the public who thought they were choosing an easy life. After many recruits left to join the war effort, the Government passed a statutory order preventing full time members resigning. Once the Blitz started, attitudes towards the volunteers quickly changed and they received the recognition they deserved.

Sadly for Robert and his family, Robert’s contribution to the war effort was cut dramatically short when he was tragically killed at the Old Palace School in East London on 20th April 1941, along with 33 of his fellow colleagues. 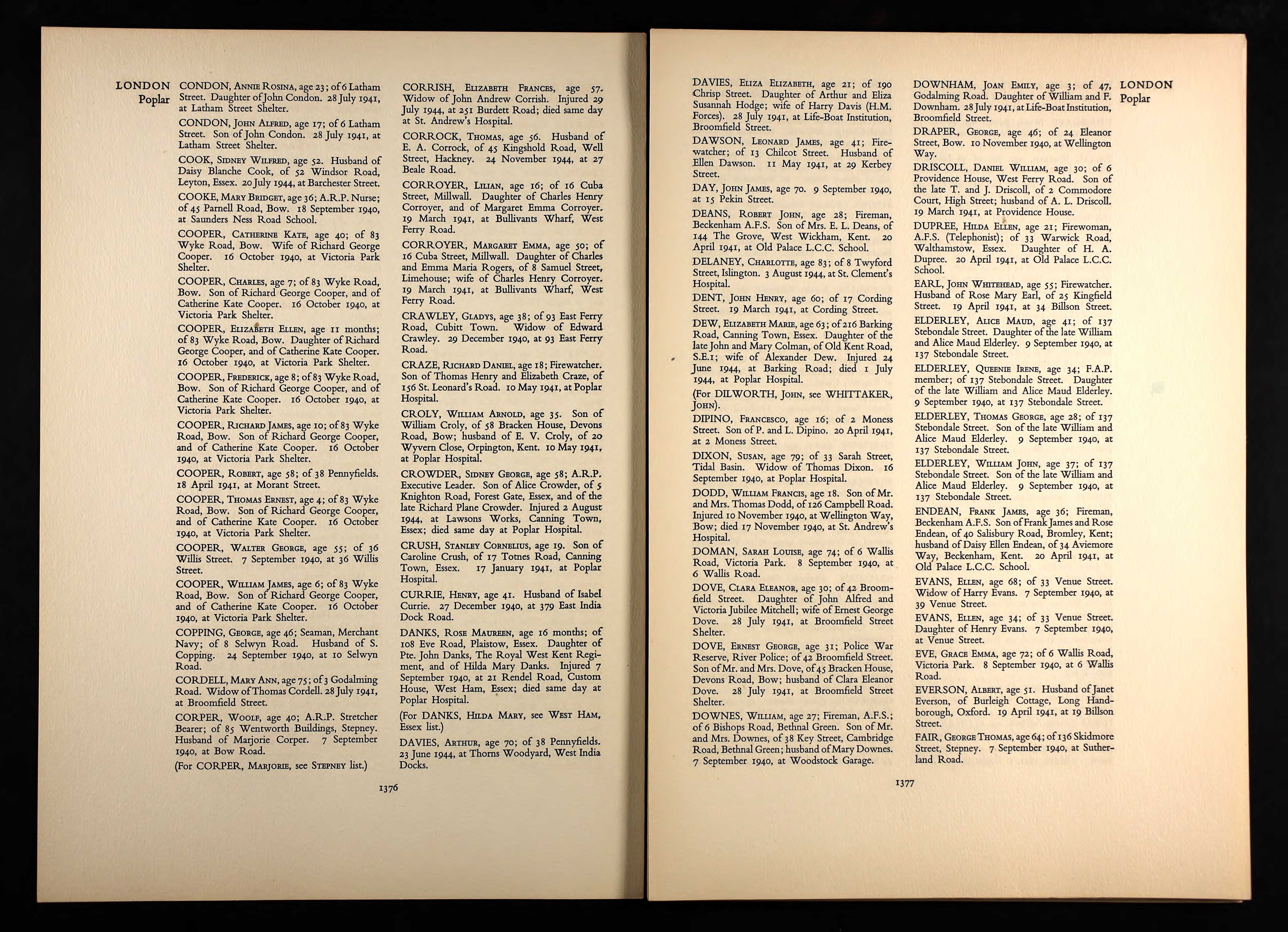 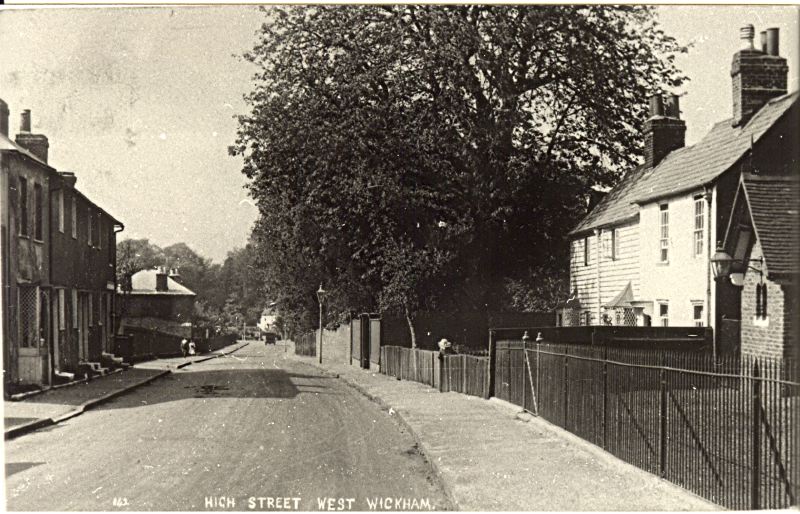 Below is a picture of a Parachute Mine which was the type of bomb that was used by the Germans at the Old Palace School and responsible for the death of the 34 Firemen and Women. I 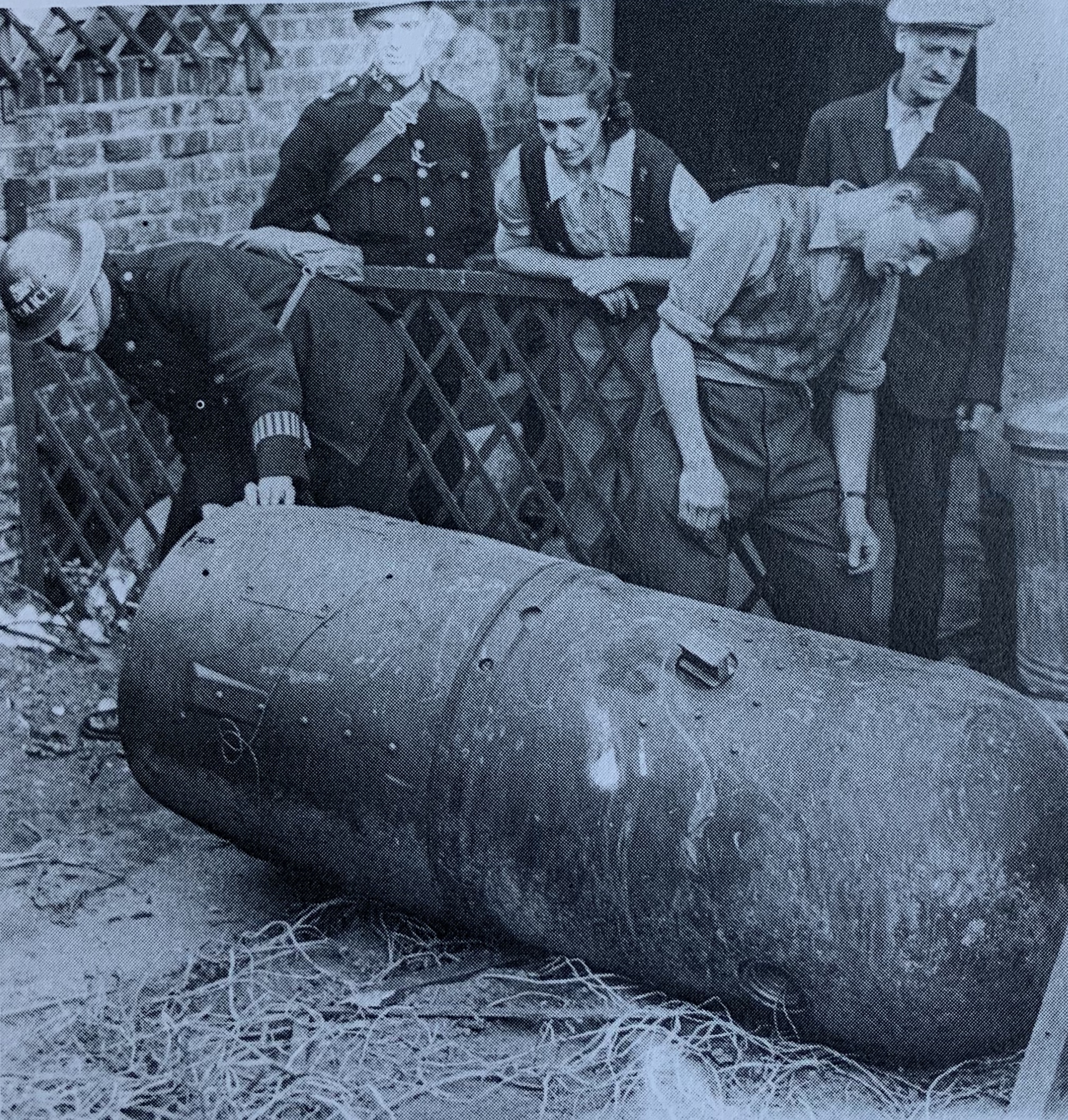 (Image of a typical Parachute Mine – picture courtesy of Steve Hunnisett | www.blitzwalkers.co.uk)

‘A fatal accident occurred on Good Friday at the junction of Kirkdale and Dartmouth Road, Sydenham, when 81 years old Mrs. Emily Deans of Northwood was knocked down by a motor cycle while crossing the road. An inquest on Mrs. Deans was opened on Tuesday at Ladywell Coroner’s Court but adjourned to April 22. Dr. Arthur Davies, Harley St pathologist, said Mrs. Deans had died from shock and multiple injuries. The motorcyclist was 26 years old Mr. Arnold Barrett of 52 Randlesdown Road, Bellingham.’  Note: Good Friday 1952 fell on 11 April 1952. 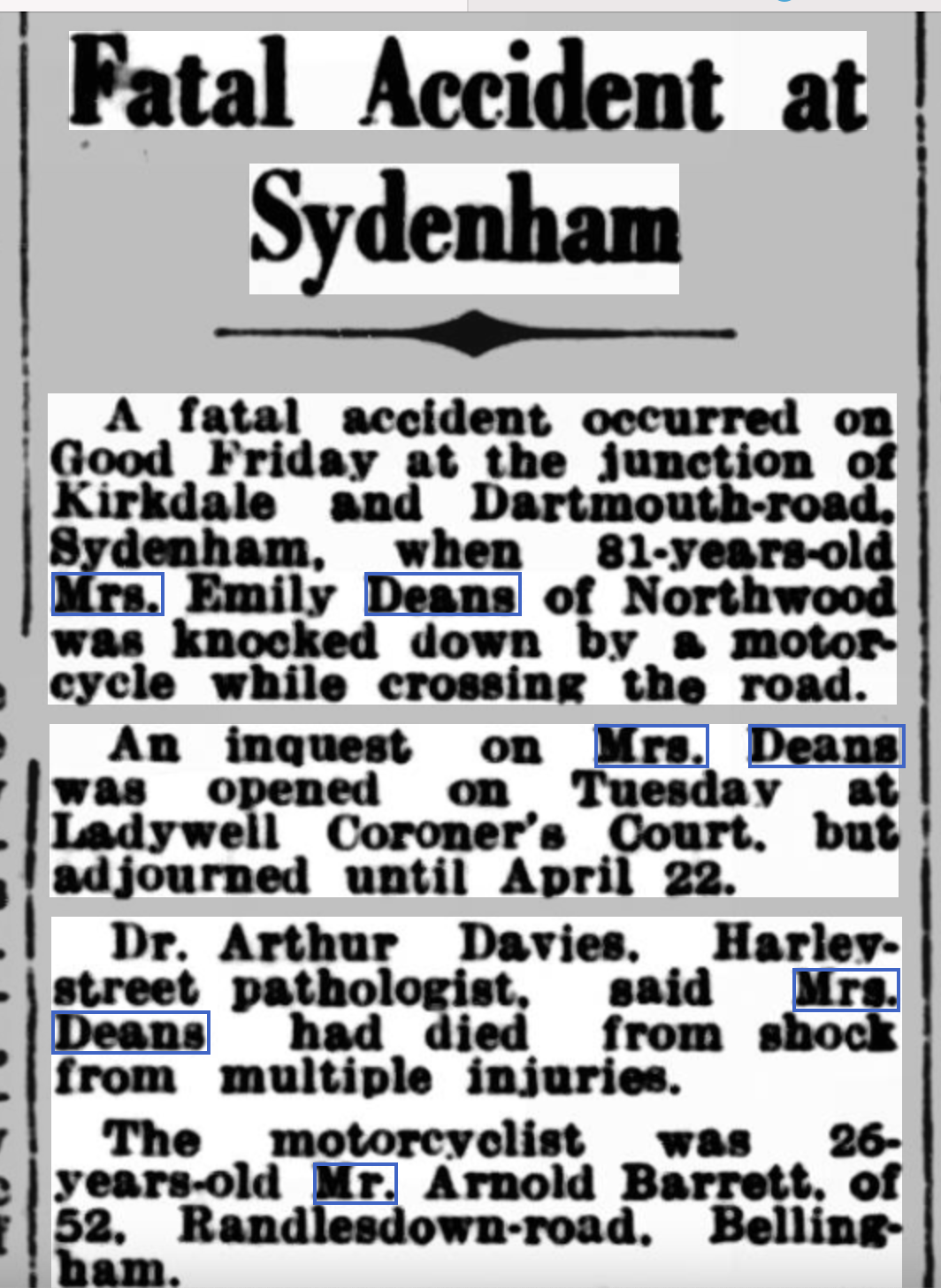 The 29 April 1952 edition of the Lewisham Borough News includes a report of the inquest which refers to the victim as Emily Louisa Deans. Mrs. Deans had been staying with a friend in Sydenham for a few days and was returning from posting a letter when the accident occurred. The item confirms that the accident happened on 11 April and that Mrs. Deans died on 13 April. 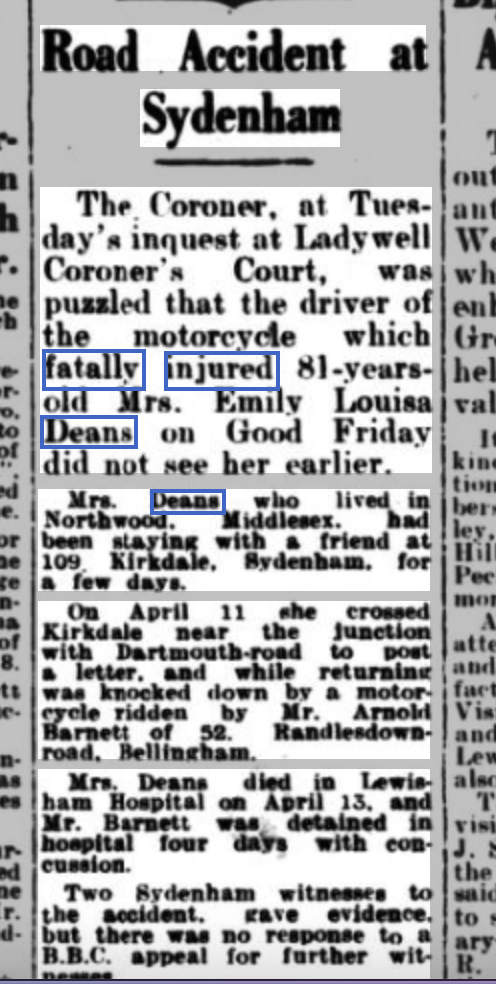 In a cruel twist of fate that so often happens when telling the stories of our ancestors, Robert John Deans cousin, Catherine Louise Scott was also killed on the same night of 19 April 1941, in a totally separate incident, by enemy action. 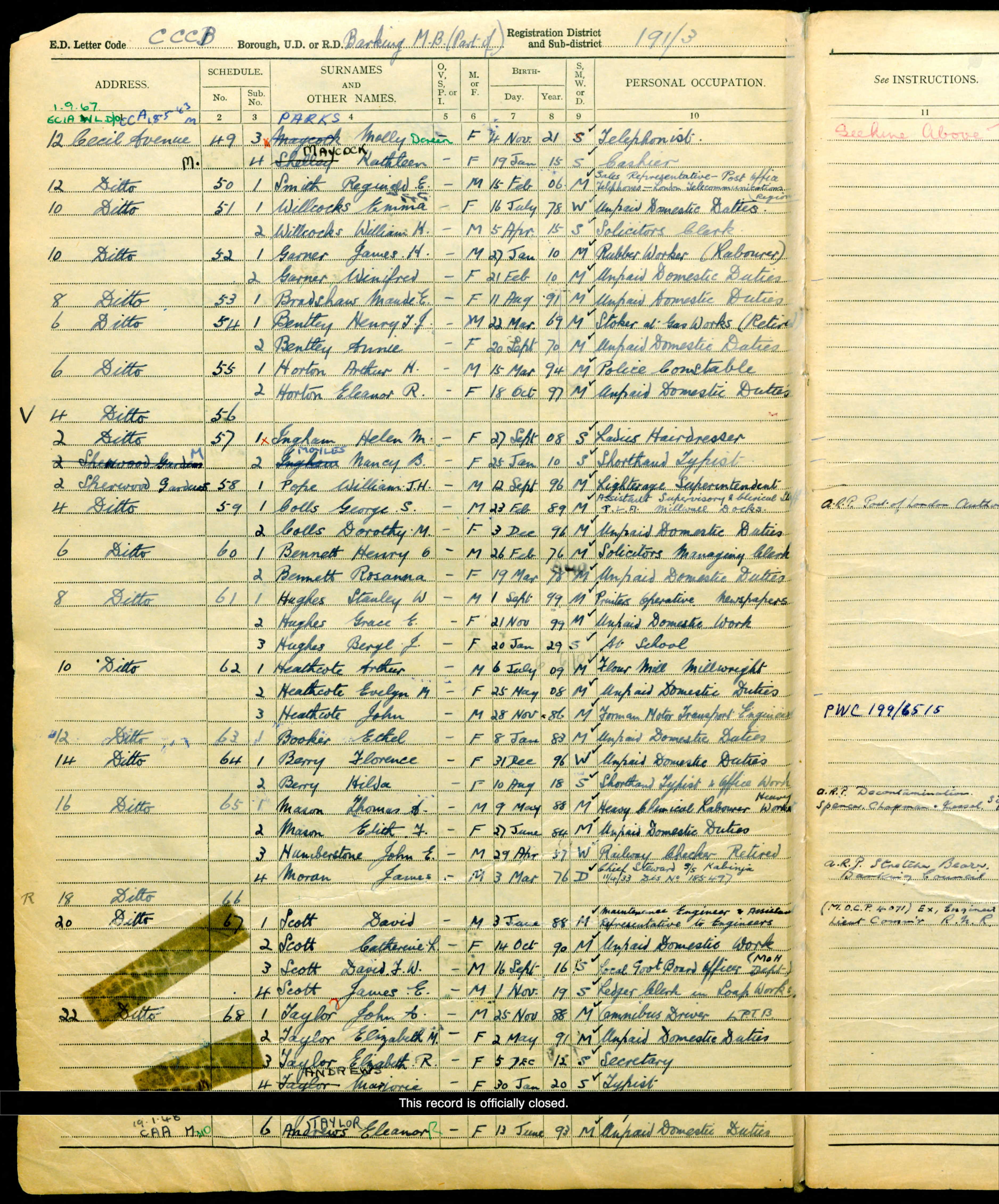 Catherine Louise Scott was killed on 19 April 1941 at her home address, she was amongst many of her friends and neighbour’s who were all killed by the same explosion. We have looked through the list of civilian deaths in the municipal borough of Barking and it seems 13 other people were killed in Sherwood Gardens on 19 April 1941 – 3 at number 13, 6 at number 17, 1 at number 22, 2 at number 16, and 1 at number 12. Despite numerous checks we have been unable to find any records or references to this incident online or in the newspaper archives. 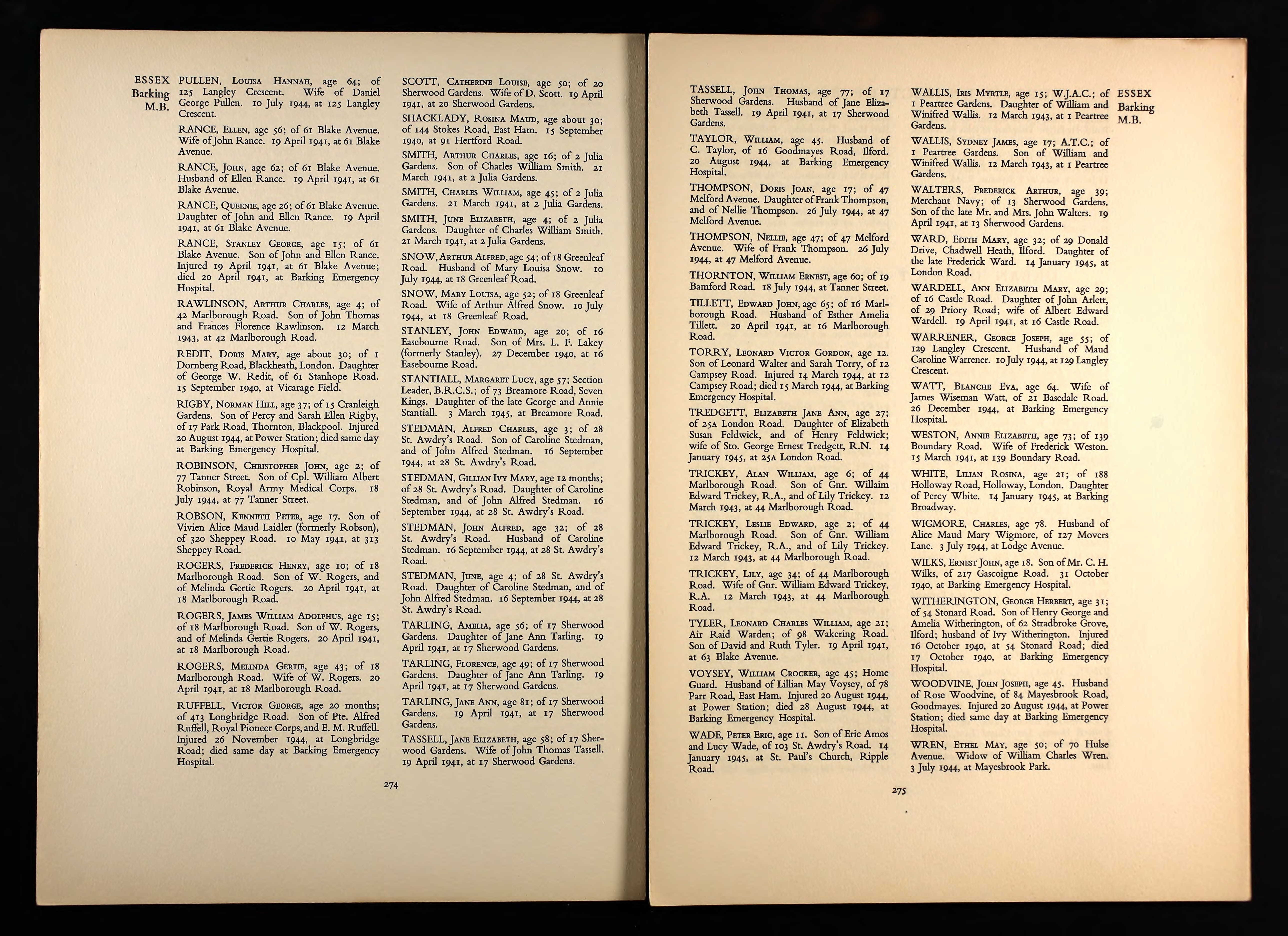 Catherine is buried at Rippleside Cemetery in Barking in Essex and a picture of her grave is shown below. 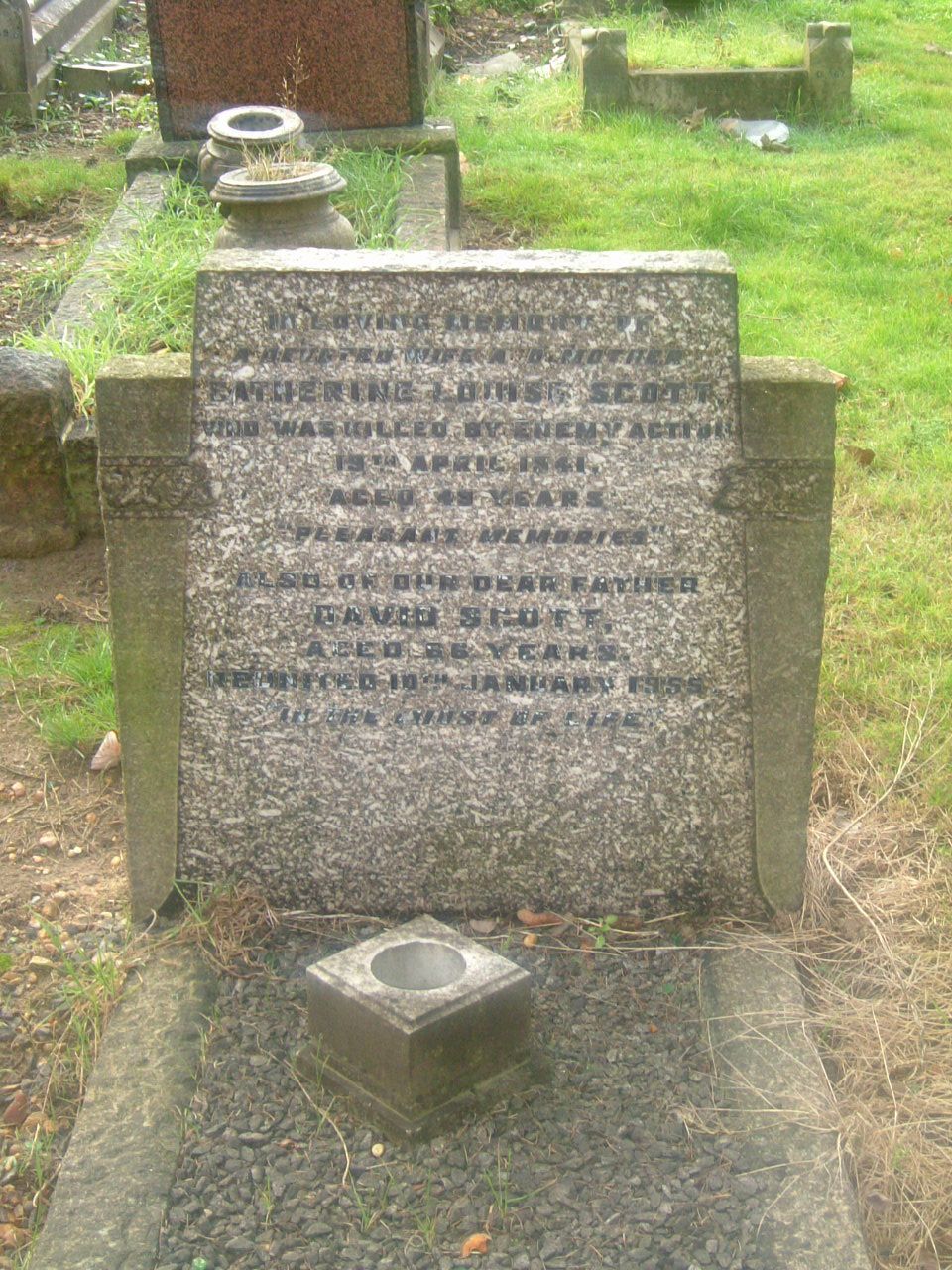 Fate can sometimes deal the cruelest of blows and for one family to lose two members at two separate incidents on the same night is unprecedented and truly awful for any family to have to cope with. The Deans family were another family ripped apart by the ravages of war but we should never ever forget the sacrifices that these brave men and women gave in one of this Country’s darkest hours. We will always be eternally grateful for their courage, bravery and the ultimate sacrifice they gave to ensure that we enjoy the freedom that we have today.