Killed in the Line of Duty………

Sadly Cyril Bertram Porter was one of those Firefighters that left very little footprint behind in the actual records, but his loss and the loss to his loved ones would have been felt equally as deep. He gave the ultimate sacrifice for his Country and that sacrifice will always be remembered and never forgotten.

Cyril Bertram Porter was born on 5 September 1909 in West Ham in the heart of the East End of London., He was the first of two children born to Bertram George Thomas Porter and Annie Porter, née Paterson, who were married on 28 February 1909 at Emmanuel Church, Forest Gate, London.

In the 1911 Census Bertram and Annie were living with Bertram’s parents George and Rhoda Porter, along with Cyril and his baby sister Violet, at 73 Field Road, Forest Gate. Also at the same address was Bertram’s sister Agnes, and three boarders. Bertram’s occupation is given as ‘Collector, Artificial Teeth Association’. It’s difficult to fully understand what this job would have entailed, but it’s my best guess that he made false teeth for people. There were ten people recorded as living at 73, Field Road, in just four rooms, which must have been extremely difficult for the family, living in such cramped conditions. The house can be seen in the image below the census and you can see that it a typical two up two down terrace that was commonplace at the time.

By the time the 1921 Census was taken the Porter family had moved to 31 Cobbold Road in Forest Gate and living at the home address along with Cyril was his mother Annie Porter aged 33 and his younger sister Violet Josephine Porter. Both Cyril and his sister are recorded as being in whole time education. Interestingly his father Bertram George Porter is missing from this census, but is still noted as being ‘alive’. Although there are less people in the household, the property is recorded as only having three rooms. 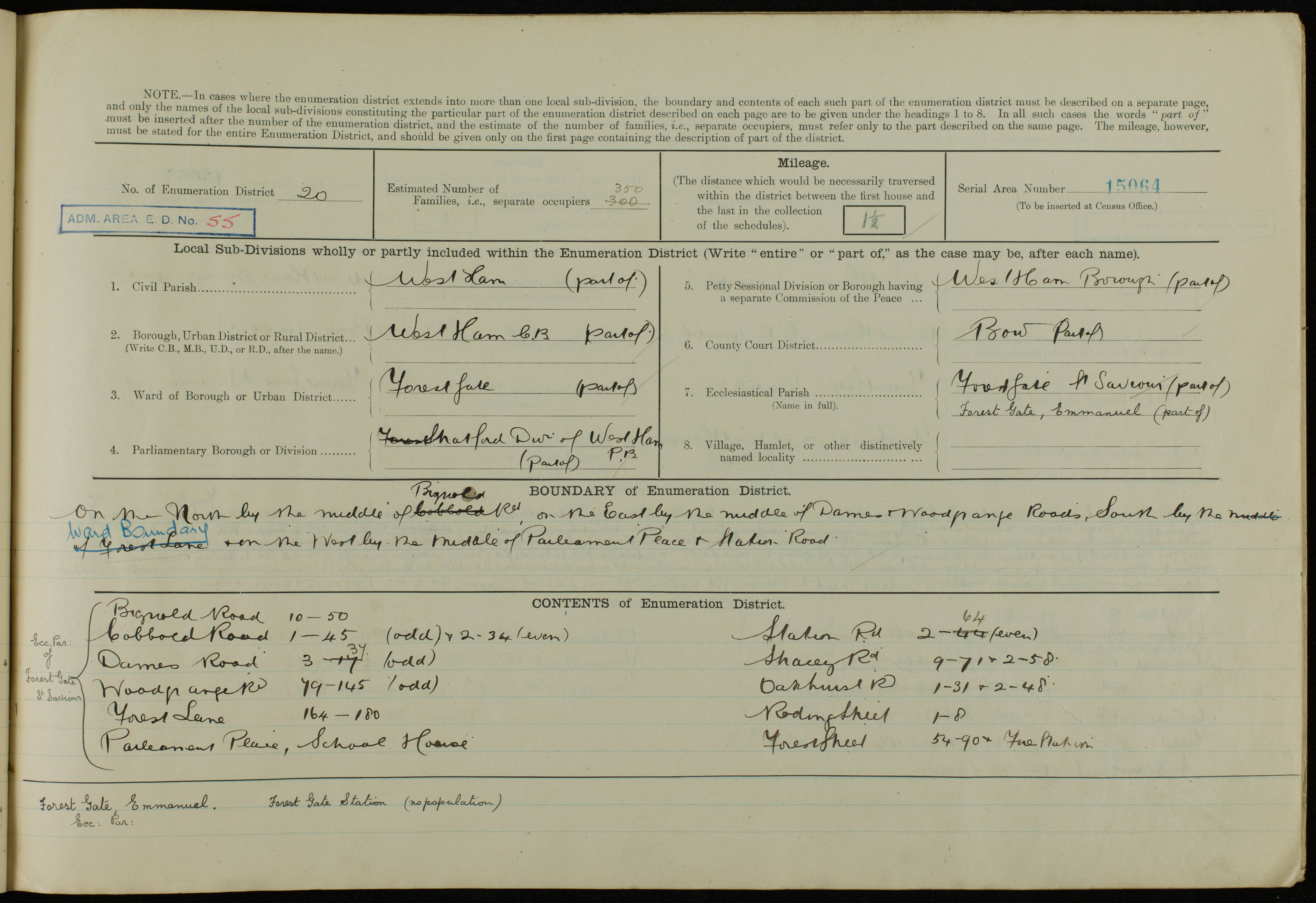 Cyril next shows up in 1929, when he appears to have enlisted in the Royal Artillery on 9 March. I say ‘appears to’ because there is not enough supporting information (date of birth or next of kin) to establish this with absolute certainty. However, a search of birth records on the GRO site indicates that there were no other males named Cyril Bertram Porter of an age eligible to enlist. Cyril was discharged from the Artillery less than three weeks later, on 28 March. The discharge code on the record is ‘para 370(vii) KR’, with ‘KR’ meaning ‘King’s Regulations and Orders for the Army’. While some editions of the King’s Regulations are available for free online, the edition that would have applied at this time would have been the 1928 edition, which is sadly not online. A post on the Rootschat forum suggests that paragraph 370 of 1928 edition became paragraph 383 in the 1935 edition. If this is correct, then part (vii) of paragraph 383 indicates that Cyril was discharged at his own request. Beyond this, we’re unlikely to know why Cyril left the Army so soon.

Ten years later we catch up with the Porter family in the 1939 Register at 31 Clinton Road, West Ham. Living at 31, Clinton Road are Cyril and his father Bertram. Bertram is now working as an insurance agent while Cyril is shown as a factory labourer, unemployed. There is nothing in the right-hand column to indicate that Cyril had taken on any civil defence duties at this point, so we assume that he joined the Auxiliary Fire Service after the Register was taken. Also listed at number 31 were Edwin and Ellen Gevaux, and Ernest and Ada Appleton (with one redacted entry, presumably a child). Annie Porter has not been located in the 1939 Register to date, but could have possibly been evacuated at this time.

With the threat of another World War imminent, the British Government acted swiftly by organising a head count of the whole civilian population, which culminated in the 1939 Register. The Register was the pre-requisite for the issuing of National Identity Cards and the information recorded the full names, addresses, dates of birth, occupations of individuals and additional information such as somebody serving in the armed forces, or an ARP Warden, or somebody serving in the Auxiliary Fire Services (AFS). This would confirm the fact that Cyril had not joined the AFS at this time.

Cyril’s younger sister Violet married Frank Samuel Carvosso on 15 September 1934 at Emmanuel Church, Forest Gate. Violet and Frank can be found on the 1939 Register living next door to Bertram and Cyril, at 29 Clinton Road. There is also a redacted entry, most likely to have been their son Tony.

As we know, Cyril was one of 34 firefighters who lost his life on the night of 19/20 April 1941. The Commonwealth War Graves Commission lists Cyril on its roll of Civilian War Dead, noting him as “Fireman, A.F.S. Son of B. Porter, of 31 Clinton Road, Forest Gate, Essex. Died at Old Palace L.C.C. School.” He was buried on 25 April 1941 at West Ham Cemetery, just a few minutes’ walk from where he lived. The map above shows how close the houses were that Cyril lived and also how close it was to his home, where he found his final resting place of West Ham Cemetery. 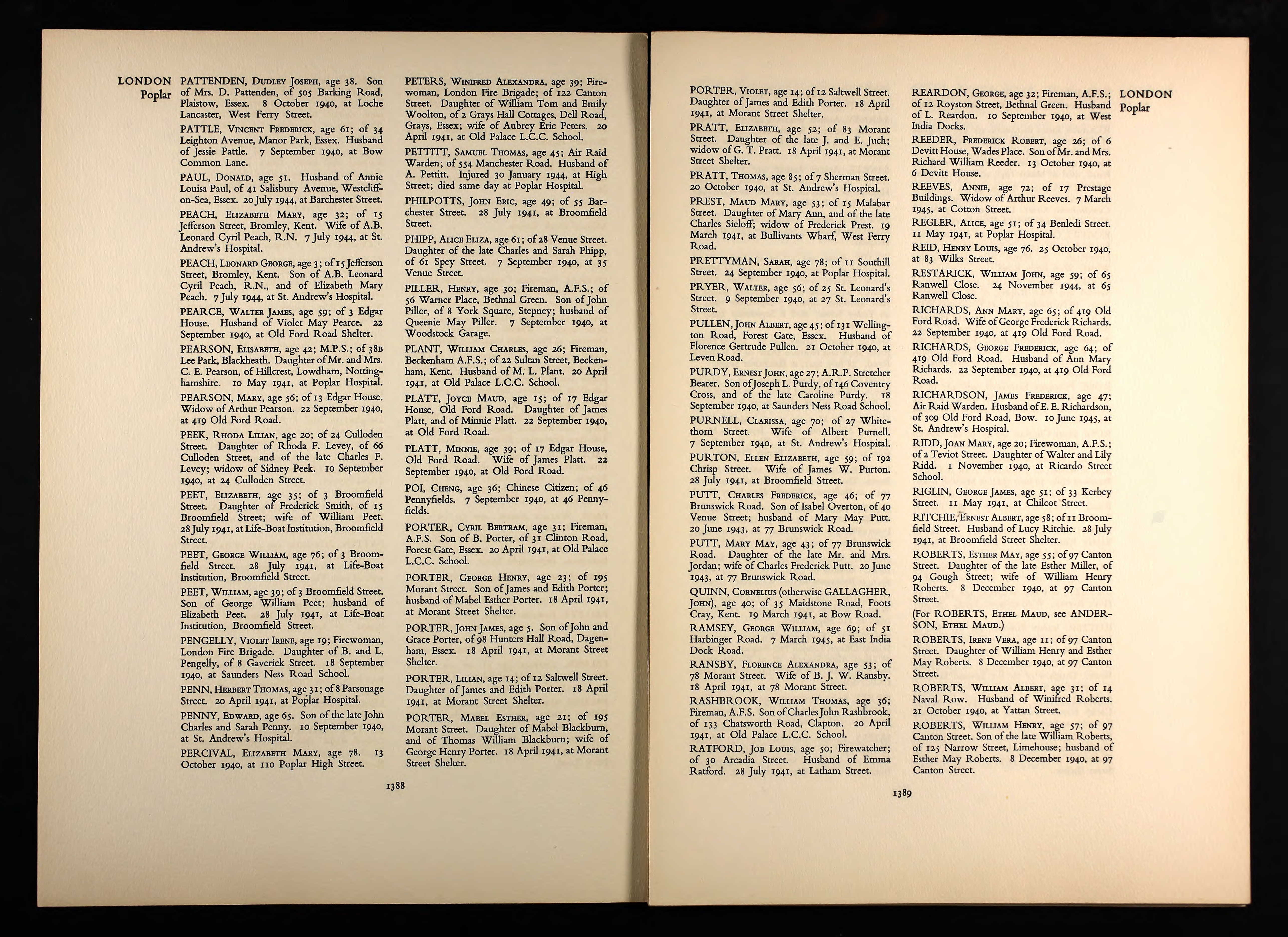 Cyril was buried on 25 April 1941 at West Ham Cemetery and a copy of the register entry is shown below, entry number 158474. The same record shows that Cyril’s father Bertram was buried in the same grave on 25 April 1965, and his mother Annie on 5 February 1968. It is unknown whether a headstone exists. The precise location of the grave within the Cemetery is plot LE/158474 and can be seen in the two cemetery maps below. 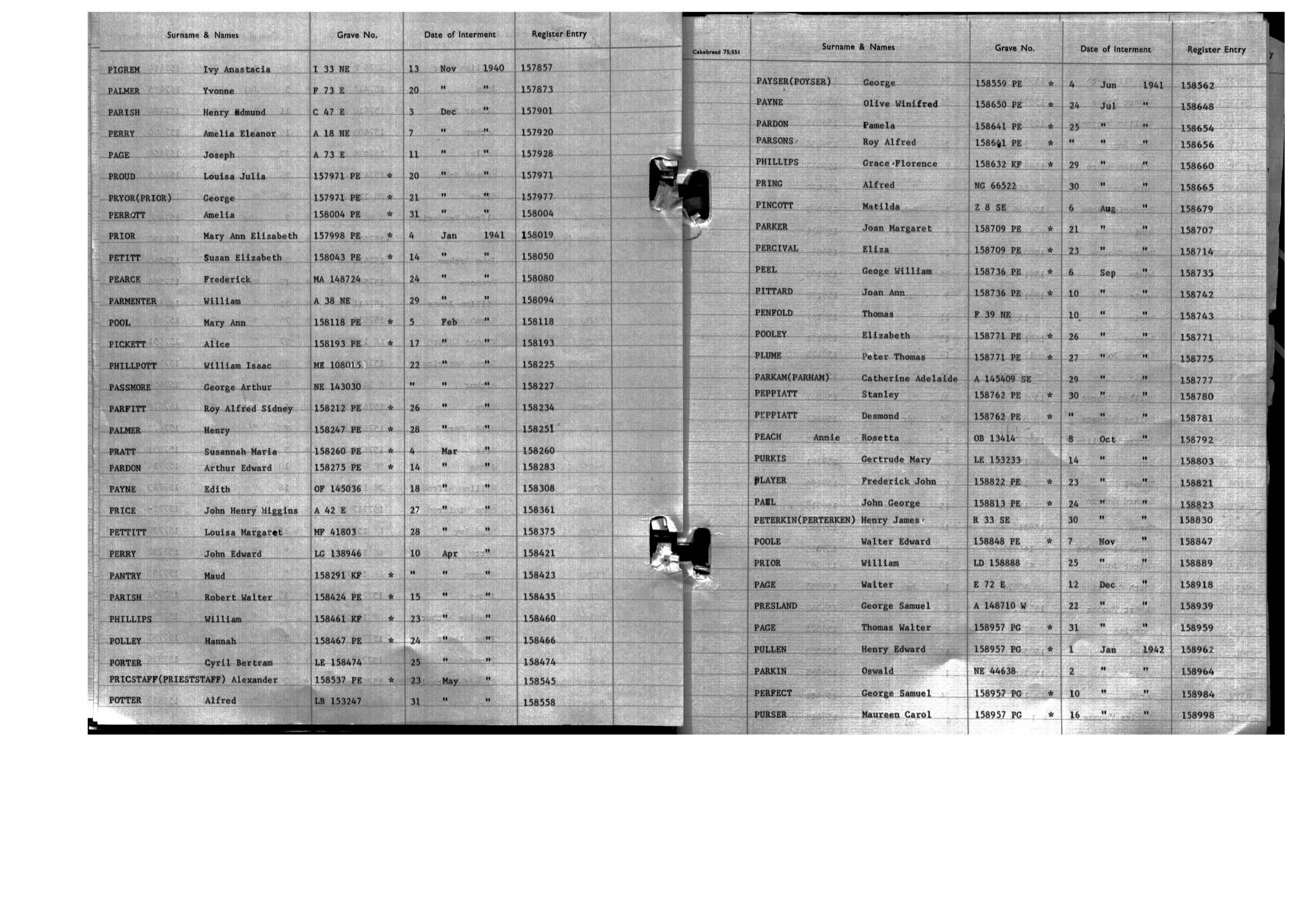 Although I have not been able to make direct contact with any decedents of Cyril Bertram Porter’s, I hope that his contribution and his life will be remembered as equally as everyone of the 34 firefighters that lost their lives at the Old Palace School on the fateful night in April 1941. He gave the ultimate sacrifice in defence of his Country and for that he will always be remembered and we will always be grateful.