The following extremely detailed research into the life of AFS Fireman Leonard Roots has been carried out by researcher Mark Doggart.

Another life taken far too young and yet another family that were devastated by the tragic events at the Old Palace School in Poplar, on that fateful night in April 1941. Leonard Roots was born on 16th April 1910 in Beckenham in Kent, the youngest of four boys, born to Herbert Roots and Elizabeth Emma Roots (nee Tombs). His three older brothers were Herbert William Roots, Percy Charles Roots and Robert John Roots (Bob). Sadly Percy Charles, who was the second child, died as a baby in 1901.

Leonard is at home with his parents and two older brothers at the time of the 1911 census and the family home is 142, Victor Road, Penge, Beckenham in Kent. Leonard’s father Herbert is recorded as a Pewterer, which is an occupation that Leonard and his two brothers also undertook, when they set foot in the outside world and started working.

Both Herbert senior and Herbert William are listed as Pewterer’s and Leonard’s other brother Robert John Roots is recorded as a Mechanical Engineer’s Assistant. Leonard himself is listed as in ‘whole time’ education and the family home is still at 142, Victor Road in Penge.

Prior to the start of the Second World War, Leonard married his sweetheart Emily Selina Martin in 1936 in Bromley in Kent. It was not long after this, that Leonard answered his Countries call to arms, by volunteering to join the Auxiliary Fire Service, which was formed at the onset of War in 1939. Leonard and his colleagues would have undergone a minimum of 60 hours basic training, which was provided by regular Fireman from The London Fire Brigade. This would have included basic hose running, drills and commands and each group of new AFS recruits would be under the command of a full time firefighter at their designated stations. All the volunteers underwent the basic training and at the end they were graded depending on physical capabilities, their age, their gender and their previous skills. Some were assigned frontline duties, whilst others were assigned driving duties, despatch rider duties, watch room duties and general administrative duties, amongst others. Leonard must have made an impression during his 60 hours of basic training as he was swiftly promoted to the role of ‘Leading Fireman’.

Leonard actually appears twice on the 1939 register, firstly at home with his wife Emily, living at 10, Avenue Court in Bromley, where he is recorded as a Pewterer, as well as being a member of the Beckenham AFS and he is recorded for a second time at the Elmers End Garage in Bromley with his fellow AFS colleagues. The Elmers End Bus Garage had been commandeered as part of the Governments war effort and used as a temporary AFS Fire Station. The main Beckenham Fire Station was in Bromley Road and there were five additional Sub-Stations each manned by a regular Commanding Officer from the Fire Brigade backed up by AFS Volunteers. The additional Sub-Stations were located at The Standard Bank in Stanhope Grove, The Midland Bank in Leonard Road, The Elmers End Bus Garage, Barclay Perkins Sports Pavilion Wickham Way and Burnham’s Factory in Kangley Bridge Road. In addition to the main station and five Sub-Stations, there were also 36 pumps and trailers located in civilian houses within the Borough. These trailers and pumps would be stored, often by a Taxi Driver or part-time Fireman, ready to be used if the emergency arose, which was almost a nightly occurrence. Beckenham formed part of the Outer London area K, which included Erith, Crayford, Bexley, Chislehurst, Sidcup, Orpington and Petts Wood, Bromley, Beckenham and Penge. 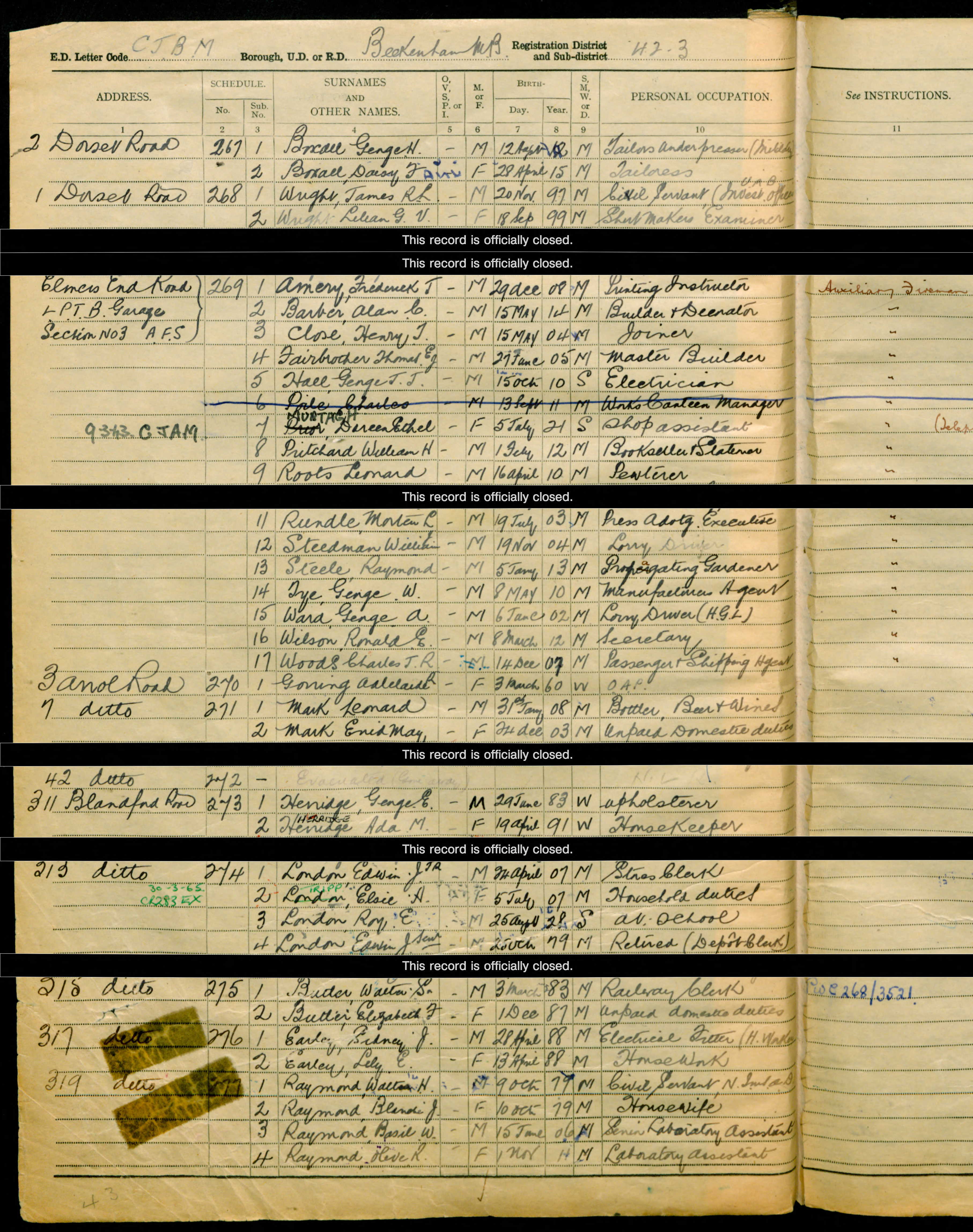 Not long after Leonard and Emily were married, they sadly lost their only son John, aged 4 days on the 8th March 1938 from haemophilia. At the time, medical treatment for Haemophilia was in its infancy and the likelihood today is that baby John would have survived. At the time Leonard is recorded as living at 13, Celtic Avenue in Beckenham and his occupation is still a Pewterer.

Little did the family know at the time, that fate was too deal them another cruel blow, just a few years later, when Leonard was amongst the 34 firefighters who lost their lives on that tragic night of April 20th 1941, Leonard was just 31 at the time. His body was not recovered for another two days, but the search continued, by his fellow firefighters, until all 34 firefighters who died had been found. The extended family only learnt of Leonard’s death from a newspaper article which showed his picture. The family had been evacuated at the time. This must have come as a complete shock to learn of his death this way and also to lose a family member so young. One would that hope that in similar circumstances today, that grieving families would be treated with more dignity and thought, even considering it was ‘War Time’, the family should never have been left to find out about the death of a loved one in this way.

Leonard’s body was found on the 22nd April 1941 and he was buried in a mass grave, in Beckenham cemetery, with the majority of his colleagues who died that night. The funeral took place on 25th April 1941 and 19 of the 21 Beckenham Fireman were buried together in one grave, which had been dug by the colleagues of those that had sadly died. The 19 coffins were placed in St. George’s Church on the Wednesday before the service took place and the coffins were guarded and looked after by their colleagues. 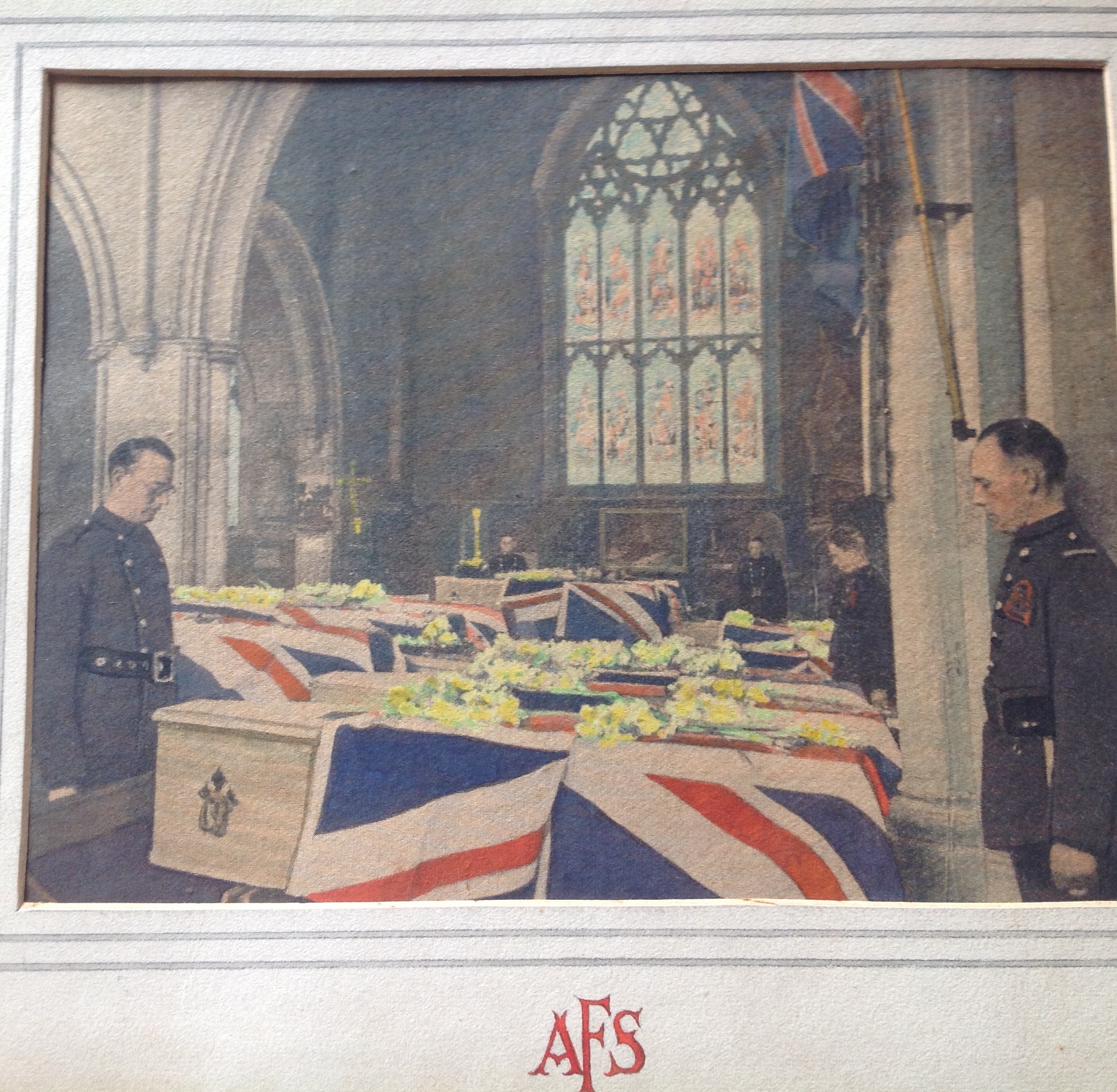 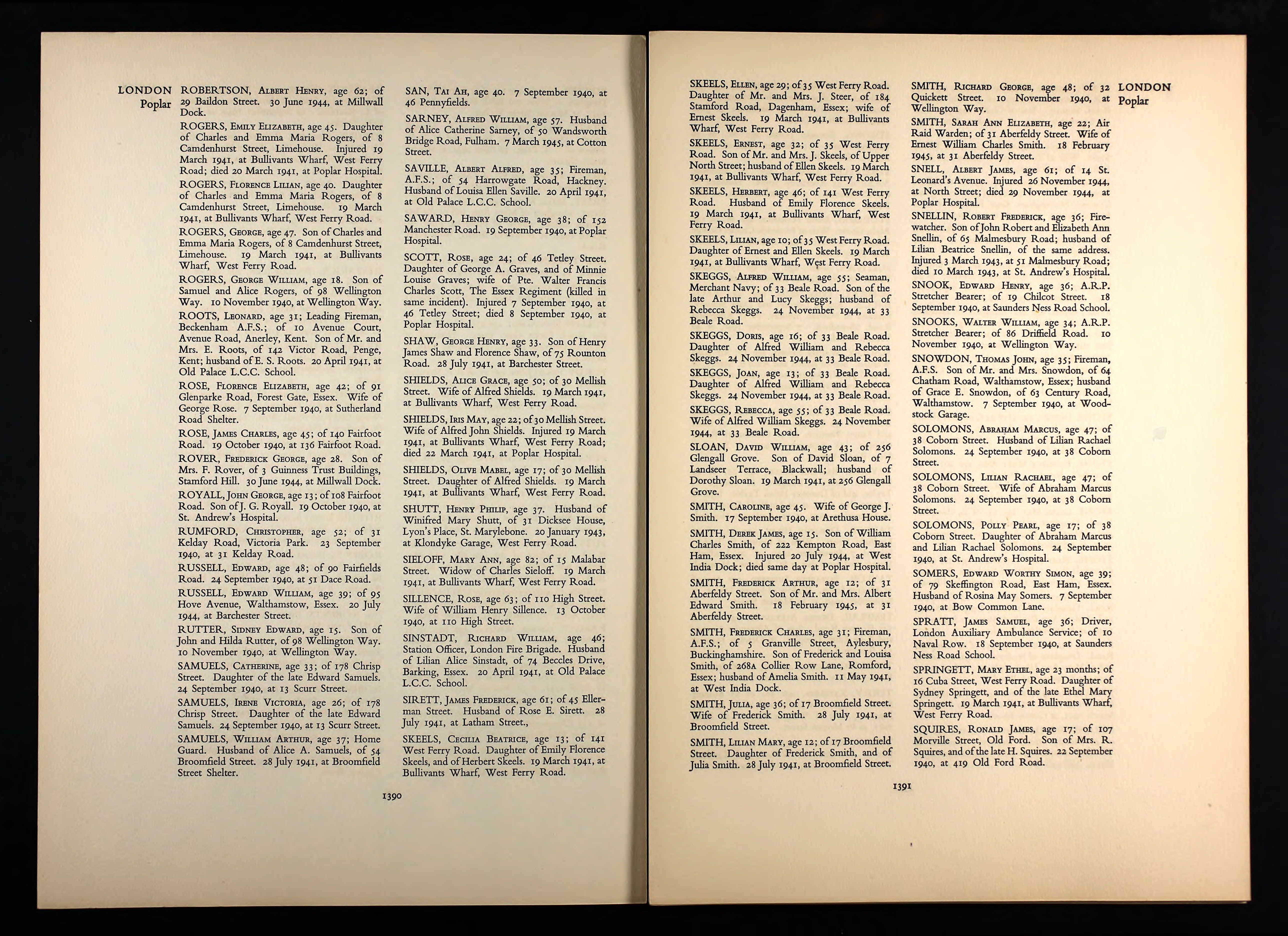 Leonard is remembered on the National Firefighters memorial in London, alongside all his fellow firefighters who lost their lives that night. He is also on remembered on plaques at the new school, (built on the grounds of the Old Palace School) and Beckenham Fire Station. 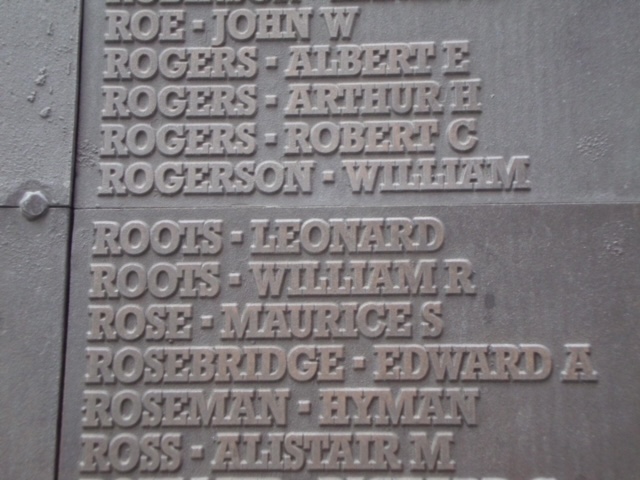 In addition to the plaques above, all the firefighters also had houses and blocks of flats named after them. Roots House is in Seward Road in Beckenham and is pictured below. 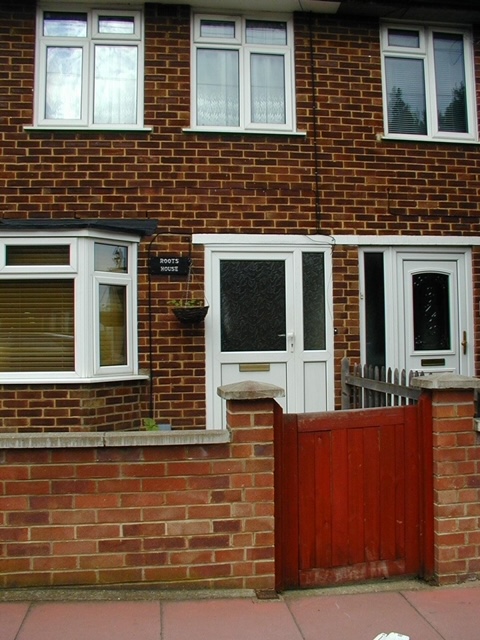 The following are memories shared by Ethel Pitts a Niece of Leonard Roots;

“War was declared on 3rd September 1939, the Sunday after we arrived home from a holiday at Ramsgate and that morning we had our first air-raid warning, which turned out to be a false alarm, an unidentified plane had been spotted. The part of the War which I suppose affected me most, was the Battle of Britain. The worst of the bombing usually started in the evening, then we had to spend the night down the Anderson shelter and in the morning it was a mater of getting to work. At the time I was working Upper Thames Street (near Mansion House), a lot of the underground and also the main line trains were not running because of the damage the bombs had caused, the firemen were still fighting the fires and it was chaos everywhere. My Uncle (Grandad Roots Brother) was killed while fighting a fire in a school in Bow, they dropped another bomb on it while the firemen were inside trying to put the fire out.

When there was a raid while we were at work, we used to go down into the basement and play dominoes. The incendiary bombs caused a lot of fires, I remember one Sunday one hit our back gate, luckily it didn’t go off. We were all issued with gas masks and had to carry them with us all the time, but luckily there were no gas bombs dropped. Most of the food was rationed and thinks like Jelly’s, Banana’s, eggs etc were a luxury and when word got out something like that was in a shop, we were round there, queueing up and most likely being unlucky when it got to our turn.” 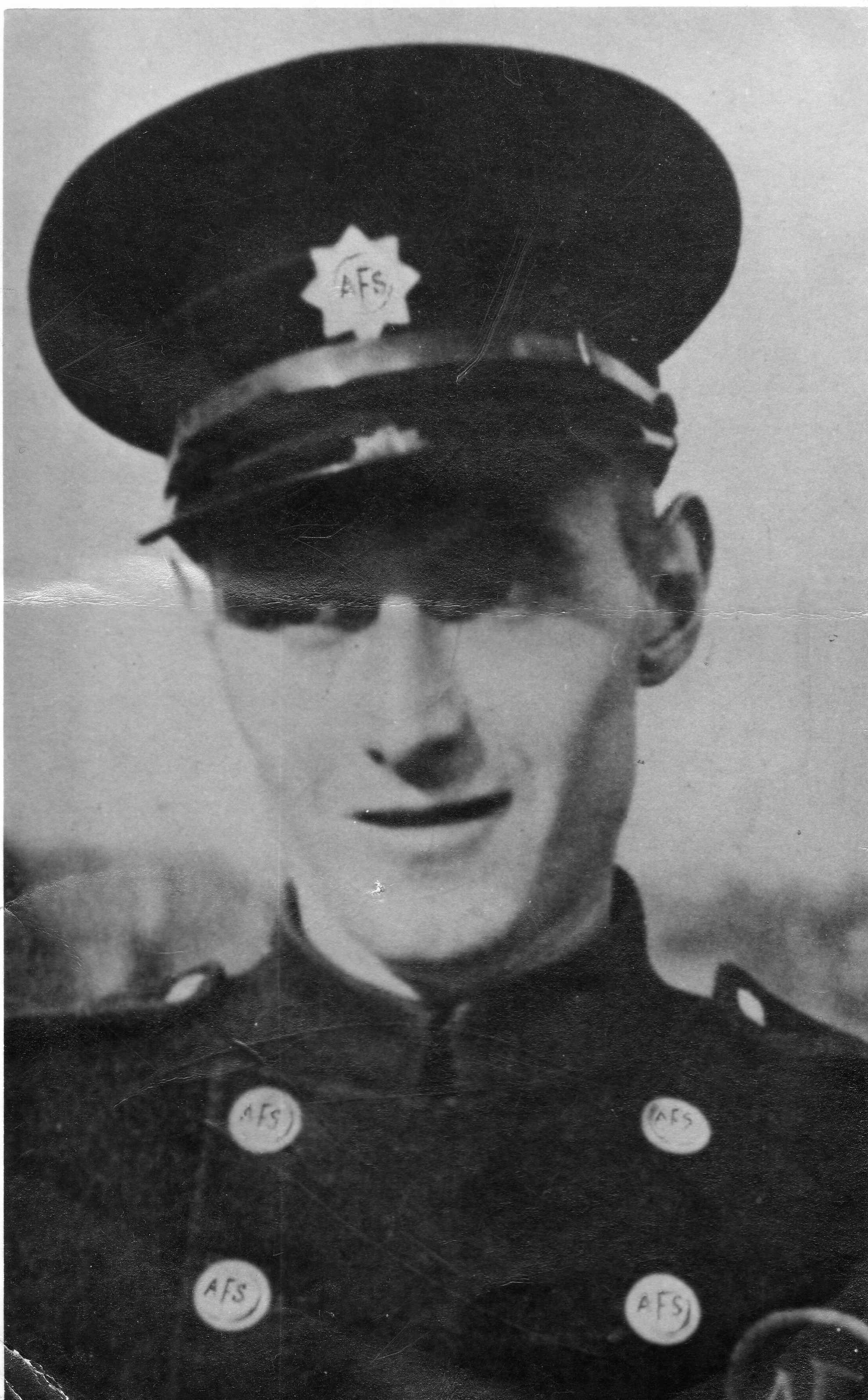 Leonard, like so many of his colleagues was taken so young, his poor young wife losing a child and a husband so soon, it must have been heart-breaking. How you overcome such loss is impossible to explain. I guess you just live a different life to the one that you had planned. So many families affected and touched by immeasurable loss and grief, a whole community that would have been devastated at losing so many young men at the same time. But their shared loss is probably what helped them to get through the darkest of days, they took comfort in the knowledge that they were not alone in their heart-break and pain.

Many thanks to the extended family of Leonard Roots who have helped to tell his story.